As the dual Canada Day/U.S. Independence Day long weekend arrived, most softwood lumber and panel prices stayed relatively flat compared to the previous week. This is the time of year when lumber demand starts to drop and prices either fall or remain flat.

The large-volume buyers — the big U.S. home builders — have made their purchases and received their wood for planned construction projects to autumn. Across North America sawmills choose this time to take seasonal and maintenance curtailments and downtime.

Sawmills were firm on most of their asking prices while extending order files into the weeks of July 11th and 18th.

“As the double national holiday weekend approached, demand for North American lumber seemed to firm up across the board.” — Madison’s Lumber Reporter 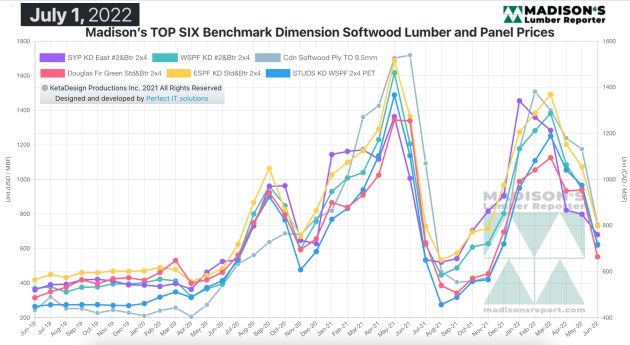 The national holidays of Canada Day and Independence Day set the stage for strong sales. Western S-P-F buyers in the U.S. worked to cover at least their immediate needs if not more. Primary and secondary suppliers alike were notably busy until around midweek, at which point many customers had covered the essentials and shifted their focus to some relaxing time off.

As players on both sides of the border prepared to enjoy national holiday celebrations, purveyors of  Western S-P-F lumber in Canada reported solid demand and takeaway overall. Sales petered out near the end of the week as everyone took off work early, but business up to Thursday was mighty encouraging.

“Solid demand and follow-through were evident in the Eastern S-P-F market as commodity prices settled into an apparent trading range. Determined customers were able to source enough material to plug holes in their inventories, but that required plenty of calling around to both primary and secondary suppliers. By midweek several producers were off the market on a number of items, further reducing the options available to buyers.” — Madison’s Lumber Reporter

Previous PostKelowna airport expansion takes off with use of mass timberNext PostNew Zealand’s log export outlook uncertain due to high shipping prices and supply chain disruptions
We use cookies on our website to give you the most relevant experience by remembering your preferences and repeat visits. By clicking “Accept”, you consent to the use of ALL the cookies.
Do not sell my personal information.
Cookie SettingsAccept
Manage consent

This website uses cookies to improve your experience while you navigate through the website. Out of these, the cookies that are categorized as necessary are stored on your browser as they are essential for the working of basic functionalities of the website. We also use third-party cookies that help us analyze and understand how you use this website. These cookies will be stored in your browser only with your consent. You also have the option to opt-out of these cookies. But opting out of some of these cookies may affect your browsing experience.
Necessary Always Enabled
Necessary cookies are absolutely essential for the website to function properly. These cookies ensure basic functionalities and security features of the website, anonymously.
Functional
Functional cookies help to perform certain functionalities like sharing the content of the website on social media platforms, collect feedbacks, and other third-party features.
Performance
Performance cookies are used to understand and analyze the key performance indexes of the website which helps in delivering a better user experience for the visitors.
Analytics
Analytical cookies are used to understand how visitors interact with the website. These cookies help provide information on metrics the number of visitors, bounce rate, traffic source, etc.
Advertisement
Advertisement cookies are used to provide visitors with relevant ads and marketing campaigns. These cookies track visitors across websites and collect information to provide customized ads.
Others
Other uncategorized cookies are those that are being analyzed and have not been classified into a category as yet.
SAVE & ACCEPT